WKNC names employees of the year

WKNC honored three staff members with employee of the year awards as part of the annual Student Media End of Year BBQ April 29. 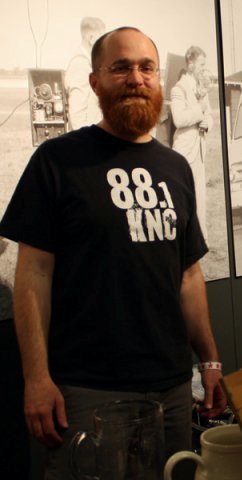 Damian Maddalena (right), a doctoral student in forestry and host of the Saturday morning program “Mystery Roach,” was honored in part for his work on WKNC’s adaptation of War of the Worlds, which aired live on Halloween 2009. Maddalena’s contributions to that project included working to rewrite the original script, recruiting actors and leading regular rehearsals, securing appropriate copyrights, and executing the live broadcast.

According to Mike Alston, a senior in civil engineering and WKNC’s 2009-2010 general manager, Maddalena was chosen for his “groundbreaking innovation and execution with the War of the Worlds adaptation. Damian continues to have one of the most popular shows on WKNC with ‘Mystery Roach’ and has been great representative and promoter of the station in Raleigh community.”

Maddalena has hosted “Mystery Roach,” a collection of progressive, fusion, psychedelic, garage and noise from the 1960s and 1970s, Saturdays from 8-10 a.m. since he joined the staff in fall 2007.

Alston also selected Eric Scholz, a junior in mechanical engineering and coordinator of WKNC’s Sessions@KNC recording project, as one of WKNC’s employees of the year. “Eric has done some outstanding work with Sessions@KNC, helping local bands with free recording sessions,” Alston said. He also labeled Scholz the “all around go-to-guy with the new concert series Fridays on the Lawn.”

Scholz came to WKNC during the spring 2009 semester and his first recording session of Chapel Hill’s Simple was released by the band as a five song EP, “WKNC Sessions Live.” Scholz has also recorded local bands including Aminal, North Elementary and Death to the Details. 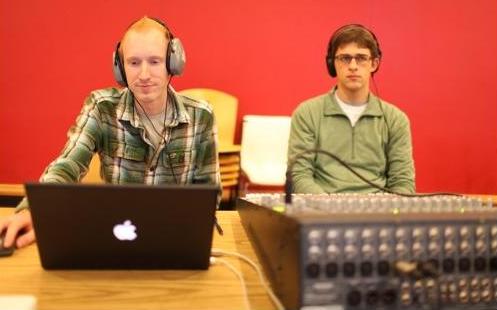 Eric Scholz (left) and Mike Alston at the Death to the Details Sessions@KNC recording Nov. 1, 2009. Scholz, Alston and Damian Maddalena were named WKNC Employees of the Year for 2009-2010.

Tommy Anderson, a senior in political science who took over as WKNC general manager on April 1, then honored Mike Alston as the third WKNC employee of the year. “I am fairly certain that everyone knows what a great job Mike did in his year as our general manager,” Anderson said. “We all owe him a huge debt of gratitude.”